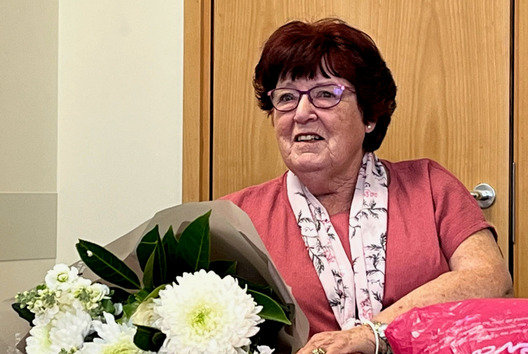 The year 1963 saw President Kennedy assassinated in Texas, the Great Train Robbery, Everton winning the English football league title, and The Beatles hit ‘She Loves You’ as the best selling UK single.

It was also the year that mental health nurse Sylvia Parsons joined the NHS!

Sylvia’s long career began as a Red Cross cadet nurse when she was just 15, having received a letter from 'Matron Needham' at Tone Vale Hospital asking if anyone would be interested in joining as a cadet nurse.

“I was immediately interested in the opportunity of working at Tone Vale Hospital,” she said. “I had always wanted to go into nursing, and I felt this was the ideal way to begin my nurse training.

“I went for my interview at Tone Vale with Miss Needham, and I was accepted as a cadet nurse, which I continued as until I reached 18, when I then became a student nurse at the hospital.

“In 1967, me and three other colleagues decided we wanted a bit of a change, so we applied for positions at Exe Vale Hospital in Exminster, and transferred across to the Devon-based hospital.

“It was working in Devon where I met my husband, who was actually from Minehead. We got married in 1969, which led me to move back to West Somerset, where I took up a role at Williton Hospital that I stayed in for 15 years. At that time, the hospital specialised in the care of older people.

“In 1984 I saw an advert in our local paper about a new day hospital being opened in Minehead for people with mental health, called Bay Tree House, headed up by the consultant Dr Shree and charge nurse Mike Scoville.

“I thoroughly enjoyed my time at Bay Tree House as we were able to take our patients out on day trips, which was really fun for everyone. We went to different garden centres and even excursions to the Sidmouth Donkey Sanctuary, which was fantastic for our patients – many of whom never usually left Minehead.

“One year, with the help of a former patient who became a co-worker, we ran a brilliant pantomime where the patients danced and made crafts – all these type of activities helped many patients to feel well enough to leave hospital, and it was wonderful to know how much impact we made.

“The unit got bigger and started to see more patients, so we moved into nearby Stone Cross House. This was undoubtedly my favourite part of my career, as the team was amazing and I co-ran day services there with my former colleague Caroline Bradbury for about three and a half years, where patients cooked their own meals under supervision.

“Finally, we moved to the Barnfield Unit at the new Minehead Community Hospital, where I’ve worked up until my retirement.

“So much has changed in mental health care over the years. When I began my career, we used to have padded cells in our units and different types of medication that are no longer in use.

“As the years went by, we began seeing patients for shorter amounts of time instead of them spending all day at our units, or even overnight.”

Sylvia said she has so many interesting stories from her career, although she admits that some of them are a bit risqué for Staff News!

“When I was in Exe Vale, my future husband brought some of his friends down to Devon for the weekend,” she said. “In fact, we had such a great time that one of my ex-colleagues fell in love with my cousin – and they’re still married 50 years later!

“We got into so much mischief in those early years! When we were young cadets, we had to be back at the nurses’ home at 9:30pm before it was locked up for the night. But when we heard that the warden had gone to bed, we sometimes used to creep downstairs, climb out of the kitchen window and go to a clubhouse!

“Another experience that I’ve never forgotten was when we were in class studying and the next thing, we heard a thud behind us – it was a fellow student, who used to give me a ride home on his BSA 650 motorbike, who had a massive epileptic fit and crashed. Thankfully it never happened when he was taking me home!”

Sylvia said she really embraced all the changes that happened over the years in the NHS. “I’ve really loved my career in the NHS, even through all the many changes I’ve seen, as the variety has always kept me motivated,” she said.

“I truly believe the work I’ve done has saved people’s lives and helped them to have a more positive, happier future.

“I didn’t really want to retire until February next year, when I’d have reached 60 years in the NHS, but unfortunately my health isn’t what it used to be, so I’ve needed to retire now.

“Hopefully I’ll be able to take things easy and go on trips and outings with my husband and family more. I also love baking so that’s something I’m going to do more of for sure.

“I want to thank everyone who I’ve known during my career – I’ve made so many lovely friends who have been there when I’ve needed them, and I know I’ll miss them greatly.”