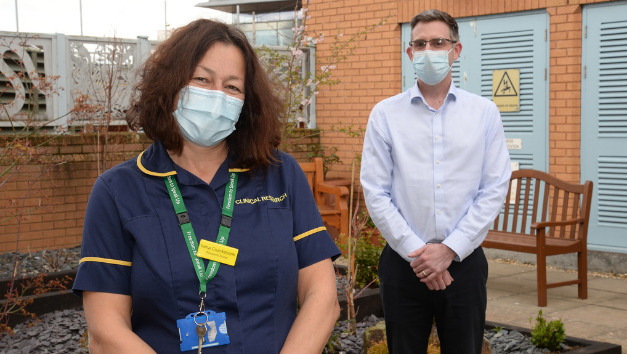 We have recently taken part in a landmark clinical trial, that found some people living with obesity lost more than a fifth of their body weight after taking a drug that suppresses appetite.

Somerset FT recruited 26 patients to the trial and had the best retention rate of patients among all the 10 NHS trusts that took part.

As part of the trial, a weekly injection of the drug, ‘semaglutide’, was given to patients who took part, alongside advice on diet and fitness.

Semaglutide will already be familiar to some people who use it as a treatment for type 2 diabetes, but this trial looked at giving it at higher doses and to patients without diabetes.

The drug works by mimicking a hormone called ‘GLP-1’, which is normally released after eating, and affects appetite by reducing hunger levels. Increased levels of GLP-1 are seen in patients that have had weight loss surgery such as a gastric by-pass.

The trial gave some people the drug and others a dummy injection, while both groups were given the lifestyle advice. The study, conducted on almost 2,000 people, showed an average 15kg weight loss during the 15-month trial, compared with 2.6kg on people who had the dummy injection.

However, a third of people lost a fifth of their body weight with the drug, compared with fewer than 2 per cent on the dummy treatment.

Dr Rhodri King, our consultant endocrinologist and principal investigator for the study, said:

“Somerset NHS Foundation Trust was one of only 10 centres in the UK invited to participate in this study. We recruited 26 out of the 218 UK patients and saw the fewest number of patients leave the trial mid-way through, thanks to the amazing work of our research nurses Irena Cruickshank and Claire Lorimer. The results of the trial were better than predicted, with weight loss seen in some patients similar to those undergoing bariatric surgery, making this a landmark trial in the medical treatment of patients that live with obesity.”

Irena Criuckshank, one of our research nurses involved in the study, said:

“We were very pleased to be involved in this important study, as we know that people who are overweight or obese are far more likely to develop diseases such as type 2 diabetes and high blood pressure. By losing weight people are less likely to develop these types of diseases. The results of the trial will now be used to assess whether semaglutide could be used more widely to treat people who are overweight or living with obesity.”