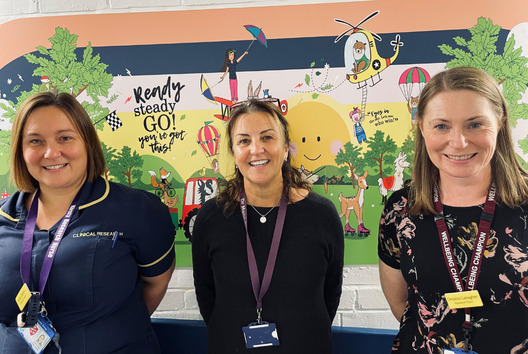 The NHS in Somerset is taking part in an international study that investigates whether it’s possible to reduce the chance of babies becoming seriously unwell with respiratory syncytial virus.

Commonly known as RSV, the virus causes cold-like symptoms in older children and adults, but can cause inflammation in the lower airways (bronchiolitis) in babies, which makes them short of breath. They can also have difficulties feeding and develop a rattly cough and /or wheezing.

The HARMONIE international study will assess the benefits of giving a drug – called Nirsevimab – to healthy babies under 12 months before the winter months when RSV is most common.

The study opened this week at Yeovil District Hospital with the first six babies expected to take part today.

The study is also likely to open at Musgrove Park Hospital in the next week.

Dr Rebecca Mann, a consultant paediatrician and principal investigator for the study at Somerset NHS Foundation Trust, said that she hoped the study would lead to fewer children needing a stay in hospital after getting RSV.

“RSV is one of the commonest causes of admission to hospital of babies during the winter months,” she said.

“A small number of children, particularly those with underlying health conditions, can become seriously unwell and may need to be admitted to a critical care unit for ventilation and more intensive support.

“As part of this international study, the Nirsevimab RSV antibody immunisation is given to the baby. These antibodies will last for about five months and will reduce the inflammation seen in the lungs during infection with RSV.

“Previous studies have already been completed in children with serious medical conditions and showed that Nirsevimab is effective at reducing serious symptoms requiring hospital admission. It has also been proven to be safe and children at higher risk respond well to it.”

“This is an extremely important and exciting study – up to 70% of babies become infected with RSV in the first year of life, and although many are well enough to be cared for at home, bronchiolitis accounts for nearly 20% of all admissions to hospital of children under 12 months.

“The chance to prevent more serious symptoms and hospital admissions for a condition that is so common really is an extremely important step forward in paediatrics.”

“Our paediatric research team will shortly be writing to all parents of babies under 12 months who were born under the care of Somerset FT (Musgrove) or Yeovil District Hospital to explain more and offer them a place on the study.”

Half of the babies who take part will be given a single dose of Nirsevimab, with the other half included in a “control” group so the researchers can compare the rates of illness and hospital admission for both patient groups.

Weekly clinics will be run by a number of our consultant paediatricians who will discuss the benefits of being involved the study.

For more information, go to the study website: https://rsvharmoniestudy.com/en-gb.